While I wouldn’t want to make these every day, they were a fun challenge. These tea-for-one sets were the result of a special request from a co-worker whose girlfriend collects this type of tea set. I decided to make two very different sets and let him choose… 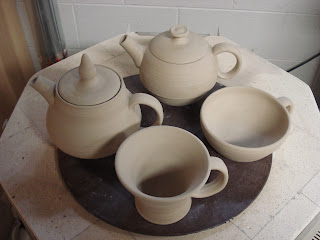 A teapot is always a tricky venture, even without having to make sure the pot fits in the cup, the handles line up, etc. 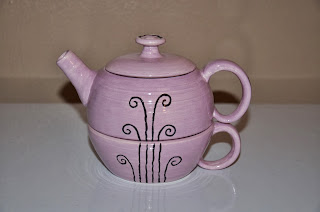 The process reminded me a little of making gingerbread houses from scratch with my kids…with every step there is a real possibility of total disaster! 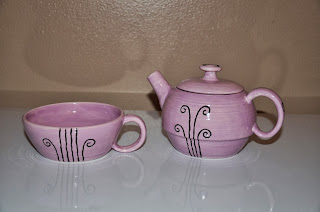 The body of the teapot, body of the cup, lid, lid handle and spout are each made individually on the pottery wheel, dried to “leather hard” and then trimmed and joined together, along with the “pulled” handles for the teapot and teacup. 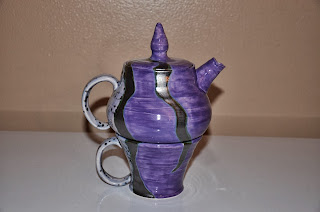 The pieces are allowed to dry slowly to avoid warping, and then bisque fired to almost 2000 degrees (a 24-hour process of firing and cooling). 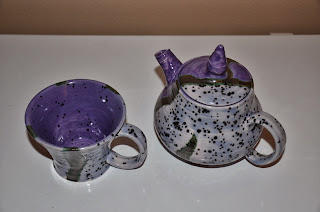 (He chose the tall, funky set for the gift.)

When I first started taking pottery classes in Arizona years ago, I decided I wanted to make a creation bowl – a large bowl depicting the biblical creation narrative. At the time, the idea fit perfectly with the majolica technique we were practicing – applying an opaque white glaze over Terra Cotta clay and then decorating it with black lines and washes of color.

Fortuitously, as it turns out, I had decided to depict the six days of “active” creation going around the inside edge of the bowl, and then to write in the bottom the Hebrew word for Sabbath, meaning “rest” – the seventh day. I was really just taking the easy way of not having to divide the circle into seven sections.  It took a while for me to notice the beauty I had accidentally uncovered…perhaps it should have been obvious from the story which I had heard countless times… It turned out that the days opposite each other on the circle corresponded to each other: Light and lights; water and water creatures; land and land creatures. How cool is that!? Maybe you knew and maybe (probably) I’m just weird, but for me it was a wonderful surprise, and it still makes me smile.

That was many years ago, and I don’t know where that bowl is now. Did I give it away? Probably. I have given many pieces away to keep them from taking over my home. So I recently made another one.

Whether you believe the biblical creation narrative is just one of many such myths, that it is a literal story of seven calendar days, or something in between, it is undeniably a stunningly beautiful, simple and yet incredibly complex story of creativity and provision. And for me it is awesome and humbling to be able to replicate in a very small way the process of using mud, water and fire to create something (hopefully) beautiful.

Genesis 1:1
In the beginning God created the heavens and the earth. 2 Now the earth was formless and empty, darkness was over the surface of the deep, and the Spirit of God was hovering over the waters.

6 And God said, “Let there be a vault between the waters to separate water from water.” 7 So God made the vault and separated the water under the vault from the water above it. And it was so. 8 God called the vault “sky.” And there was evening, and there was morning—the second day.

9 And God said, “Let the water under the sky be gathered to one place, and let dry ground appear.” And it was so.10 God called the dry ground “land,” and the gathered waters he called “seas.” And God saw that it was good.

20 And God said, “Let the water teem with living creatures, and let birds fly above the earth across the vault of the sky.” 21 So God created the great creatures of the sea and every living thing with which the water teems and that moves about in it, according to their kinds, and every winged bird according to its kind. And God saw that it was good. 22 God blessed them and said, “Be fruitful and increase in number and fill the water in the seas, and let the birds increase on the earth.” 23 And there was evening, and there was morning—the fifth day.

26 Then God said, “Let us make mankind in our image, in our likeness, so that they may rule over the fish in the sea and the birds in the sky, over the livestock and all the wild animals,[a] and over all the creatures that move along the ground.”

28 God blessed them and said to them, “Be fruitful and increase in number; fill the earth and subdue it. Rule over the fish in the sea and the birds in the sky and over every living creature that moves on the ground.”

29 Then God said, “I give you every seed-bearing plant on the face of the whole earth and every tree that has fruit with seed in it. They will be yours for food. 30 And to all the beasts of the earth and all the birds in the sky and all the creatures that move along the ground—everything that has the breath of life in it—I give every green plant for food.” And it was so.

31 God saw all that he had made, and it was very good. And there was evening, and there was morning—the sixth day.

Genesis 2:1
Thus the heavens and the earth were completed in all their vast array. 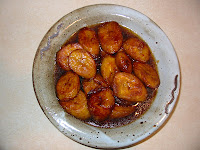 One of the first pottery classes I took was Functional Pottery. A love of good food and drink, cooking and presentation all meet in this arena. This held a strong appeal for me as a food lover with artistic leanings. My kids used to laugh at my nearly pathological need to “arrange” food. Even now, as we cook I think, “What would I want to serve this in?” and as I create, “What would I eat/drink/serve from this?” Functional pottery involves not only size and shape, but also use of color (contrasting or complementary), and the matching or mismatching of sets.

Probably my favorite functional pottery experiment is the dip plate, originally inspired by my son who loved dipping foods, especially chicken nuggets, but hated when the pool of sauce ran into the pieces. So a set of dipping plates was born. Many have been made since, some shallow and some a bit deeper, with new uses popping up all the time – pot stickers and sauce! (pictured) hot wings and blue cheese dressing! apple slices with peanut butter & honey!

There have been failures. My dad asked for a long, narrow bread baker with a lid, which has proven very difficult. At this point he’s using a semi-successful baking dish with a makeshift covering of some sort. I’m still pondering how to tackle it. 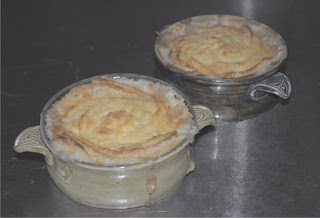 A new addition is the Shepherd’s Pie crock. We always used larger baking dishes for a full recipe, but any time we ordered it at a restaurant, I would be drawn to the individual serving size. The initial result is pictured (note the trinity knot handles), and has since evolved to include a small serving plate – a practical necessity for the lovely mess that is Shepherd’s Pie.

So form continues to follow function…most of the time. New ideas and inspirations are always welcome – what is your functional pottery need?

The Milwaukee Empty Bowls lunch is coming up! Pictured are just some of the bowls we are donating to help alleviate hunger in our area.

From the website: “At our annual event, guests choose from over 2,000 ceramic bowls handcrafted by local artists, teachers and students. Soups prepared by more than 50 local chefs are served with bread and other refreshments.” The money raised is donated to local organizations (this year there are eight who received grants), and last year the amount was over $42,000.

The empty bowls concept was started in 1990 by an art teacher in Michigan who wanted to help his students reach out to help the hungry. It has become an international movement. I have had the privilege of attending and donating/volunteering both in Phoenix and Milwaukee. It’s a lot of fun and, especially in Milwaukee, I’m astonished that people are willing to stand in long lines to donate their hard-earned money. But of course it’s a great cause, delicious soup and even includes a hand-made souvenir!

The event details are:
Saturday, October 13, 2012, 10:30 am – 2:00 pm
MATC-Oak Creek, 6665 S Howell Ave, Oak Creek
$20 Donation – Includes soups, bread and a handmade bowl of your choice (first come first serve) to take home with you “as a reminder that there is always someone in our community with an empty bowl.”
www.milwaukeeemptybowls.org

This set of dinner plates was made as a gift for a friend, hand glazed by Matt with glossy black and steely silver logos. New techniques and materials allow for really precise glazing, in this case all done by hand with a brush. Terrific results, don’t you think? He’s planning to make more, Star Wars and beyond. Ideas anyone?

Check out these sites